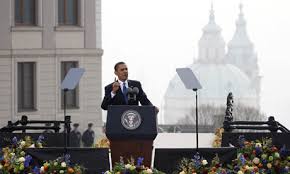 …Some argue that the spread of these weapons cannot be stopped, cannot be checked — that we are destined to live in a world where more nations and more people possess the ultimate tools of destruction. Such fatalism is a deadly adversary, for if we believe that the spread of nuclear weapons is inevitable, then in some way we are admitting to ourselves that the use of nuclear weapons is inevitable.

Just as we stood for freedom in the 20th century, we must stand together for the right of people everywhere to live free from fear in the 21st century. (Applause.) And as nuclear power — as a nuclear power, as the only nuclear power to have used a nuclear weapon, the United States has a moral responsibility to act. We cannot succeed in this endeavor alone, but we can lead it, we can start it.

So today, I state clearly and with conviction America’s commitment to seek the peace and security of a world without nuclear weapons. (Applause.) I’m not naive. This goal will not be reached quickly — perhaps not in my lifetime. It will take patience and persistence. But now we, too, must ignore the voices who tell us that the world cannot change. We have to insist, “Yes, we can.” (Applause.)